When June rolled around and classes had officially ended, I carefully packed my RyanAir-approved suitcase and left Paris for one final adventure before heading back to the United States: a 2 1/2-week voyage that led me to Berlin, Munich, Linz, Prague, Krakow, Donegal, Galway, and London. Being me, I printed off every train, bus, and airline ticket, wrote down addresses, and printed out maps (all put in a folder in the order of my travels, of course). Everything was ready to go, and I was ready to see a part of Europe I had never seen before.

In Berlin, I couchsurfed with a wonderful woman named Kaja, who provided me with a comfortable couch, good conversation, and wonderful tips about her very historically-rich, lively city. After day one, I was hooked. There’s a unexplainable energy in Berlin, which is most likely why young people flock there. My guide on my Free Tour (an American from St. Louis!) was one of those people who stayed here for a short amount of time and extended it into a long-term stay. And I totally understand why. I was captivated by its history, charmed by its quirky and friendly people, and amazed by its willingness to overcome a painful past and become even stronger from it.

Berlin will absolutely be one of the cities I return to in the future—I have always been fond of large cities (Paris, New York, Rome, London), and Berlin did not let me down. I’m already excited to go back.

After I left Berlin, I prepared myself for a very long train ride—11 hours—to Linz. I had two train changes, and after I got off the first train and onto the second, the conductor informed me that the final leg of my trip—Munich to Linz—was cancelled because of the recent flooding in Germany, Austria, and the Czech Republic. But I wasn’t stranded—quite the contrary, actually. I had just made friends with a Mexican girl who was studying in Munich, and, after hearing my train was cancelled, offered her couch in her apartment for the evening. I gratefully accepted, and she showed me around her city that evening. I couldn’t have asked for a better detour—I got a glimpse of a city I thought I would have to pass through and made a beautiful new friend at the same time.

I made it to Linz the next morning to see my dear friend from high school and his friends he was studying with in Austria. This was probably the most relaxing leg of my trip—the weather was perfect, Austria was gorgeous, and the company was wonderful. I loved spending time in Linz, and I loved even more that I was visiting friends while I was there. 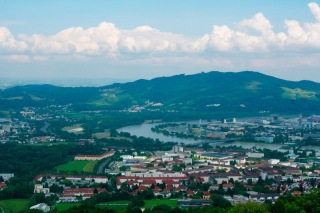 From Linz, it was easy to take a rather quick bus to Prague, where I expected to be spending an evening and a day exploring alone. I spent the first night walking around the river and seeing Charles Bridge and Old Town Square, two of the most popular tourist destinations in the city. I was quite captivated by the beauty of Prague—it is a truly picturesque place. Unfortunately, though, I arrived in the small city just after major flooding, so it was a bit empty, which made the atmosphere a bit sad. I was lucky to make friends with an American guy in my hostel, and we wandered around a bit, but the weather was poor and I found myself lacking for things to hold my interest. It was strange, especially after such wonderful experiences in Germany and Austria.

Despite this slightly disappointing trip to Prague, I was still impressed by the city and would love to return—but, next time, with friends or family and perhaps a better idea of what to do while there. 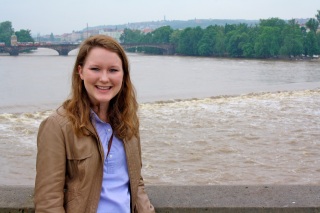 Prague to Krakow included French practice with a Swiss guy on my overnight train, actually successfully falling asleep on an overnight train (a rarity! For those traveling in Europe by train, get a couchette when you travel overnight—you have a much higher chance of actually sleeping than a regular seat), and a joyous greeting by my beautiful Polish friend as I got off the train. Krakow itself was a very cool place to be—filled with wonderful people, delicious food, and interesting architecture. Aneta, my dear friend and tour guide by default, introduced me to Poland’s best food, beer, and people (her lovely roommates!), and I had a wonderful time with her. 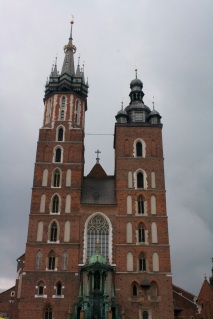 My second day in Krakow, I got up early and grabbed a bus to Auschwitz, the most famous concentration camp in the world. The Holocaust has always been something that has both fascinated and horrified me, and my trip to the Holocaust museum in Washington, D.C. was my first taste of the reality of this terrible moment in World History. I have always wanted to visit Auschwitz, but when I arrived, I found that it was something I could have never fully prepared myself for.

The almost 4-hour long tour started with a museum-type display in the barracks of Auschwitz I. I found as the tour went on that we were very much eased into the reality: posters and documents came first, the guide explaining where prisoners came from in Europe and how they were transfered to Auschwitz. Then we saw the belongings of prisoners: suitcases, glasses, shoes, pots and pans, even an entire room filled with hair. Still, though, we were in a museum setting. It was starting to feel more real, but almost surreal. After seeing the Wall of Death, the location where the Nazis killed prisoners in a line, I started to really feel where I was. And as I stood inside the smallest gas chamber of the Auschwitz complex, I imagined groups of people expecting a shower, only to receive a cleansing of deadly gas. It was quite an emotional moment.

Birkenau is the camp in all the photos we see in textbooks and museums, and I recognized its barracks, train tracks, train platforms, and entrance right when we arrived. Birkenau was the most difficult part of the tour by far because the camp was kept entirely in its original state. I saw the remains of the gas chambers that the Nazis destroyed to attempt to cover their tracks; the living conditions of men, women, and children who were brought to the camp; and the train platform where people where divided into those who would live and those who would die. Needless to say, I was quite affected by the end of the day. I was so thankful for Iori and Mehek, my two new friends, because that would have been quite difficult to conquer alone. I am glad I went to Auschwitz, because it was something I think everyone should see and experience, but I cannot say that it was an easy trip.

It was unfortunate that I left Krakow after a day as solemn as that, but I was looking forward to spending 5 days in Ireland visiting one of my favorite people. I hopped on a plane, met up with a friend in Belfast for a quick dinner, and got on a bus to head a bit further south to Donegal. 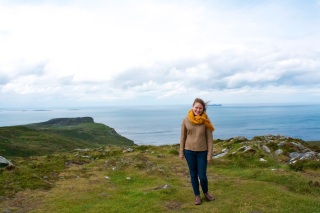 And, boy, was Ireland gorgeous. My wonderful friend Ruby lives in a very small town in a beautiful part of Southern Ireland—Donegal, which is quite close to the border of Northern Ireland. Her mother was sweet enough to give us tours of Glenveagh National Park, the Glebe House, Horn Head, and Rathmullan’s gorgeous beach. Patrick and I spent time reading and watching too many movies while Ruby worked, and we even visited her at her lovely restaurant a couple nights. I felt so at home in this gorgeous country—everyone was so sweet, and I couldn’t get enough of those killer views.
We headed off to Galway for a couple days, which was just wonderful. Charming streets, a gorgeous river, and street music on every corner welcomed us to one of the nicest towns I’ve been to in a while. Rubs, I hope you’re reading this, because you’re the only one who will understand when I say how much I miss Germ.

It was not easy saying goodbye to Ruby and Patrick, but on Wednesday I braved my RyanAir flight and headed to London. I was thrilled to see Alex and spend the evening walking down the Thames and chatting with one of my best friends. It was fantastic to spend time in London again, especially with someone who knew it better than me, and I was happy to have the opportunity to get my tourist photo with Tower Bridge. 😉

And then it ended. I got on the MegaBus the next morning, struggling to say goodbye to this wonderful guy, and headed back to Paris for my last week in Europe. It’s amazing how quickly those 17 days went by, but I knew they would fly away. And in the process, I learned more about myself than I expected to. I love spending time by myself, but I’m not the hugest fan of traveling alone. I want to share new places with my favorite people. I really hate airplanes, buses are survivable, and trains are wonderful. I adore big cities filled with noise and people, but I really enjoy a small, quiet town with a gorgeous backdrop. I don’t like hostels very much, but I love couchsurfing. I like spending lots of time in one place rather than jumping from one city to another every two days—that gives you time to get to know the locals and the city and really form an opinion about that place.

One thing was confirmed that I absolutely knew before—I am so in love with traveling.
For more photos, visit my Facebook.
To follow my travels and adventures at home in Atlanta, see my Twitter and Instagram.

« Momma in Paris
A Second Home »